The Folklore of Colmcille, told by Gearóidín Breathnach

Colmcille has a special place in the folklore of Ireland and Scotland. For this reason, Foras na Gaeilge asked the renowned  storyteller Gearóidín Breathnach and LIGID TV Productions to make a series of short videos, Seanchas Cholmcille, as  part of Colmcille 1500. In each video, Gearóidín Breathnach visits a location in Donegal associated with the saint, and she tells a story and local traditions about him:

Subtitles for the videos are available in Irish and Scottish Gaelic and in English, and it is possible to view them without subtitles. 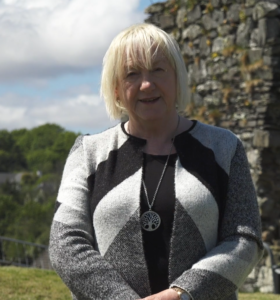 The signature tune for the series is a piece of the song Ainnir Dheas na gCiabhfolt Donn, sung by Aodh Mac Ruairí, another singer from Rann na Feirste. The verse tells of advice from Colmcille, and it can be heard in its entirety at the beginning of the first video:

Colmcille said that the generous do not go to Hell.

The rich deny their affinity with God

What a catastrophe for any one ever made

To gather as much as would keep him from Paradise.

St Columba’s Day on the Isle of Canna

The Feast day of Colmcille in Gleann