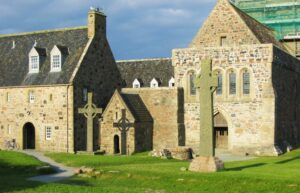 The 23 September is the feast-day of St Adhamhnán. A century after the death of St Colmcille, or Columba, Adhamhnán was the 9th abbot of Iona. It was he who wrote the Life of Columba or Vita Columbae and gave an account of how St Colmcille brought the kings of the Cineál Chonaill and Dalriada together at the Convention of Drum Ceat, making an alliance between them and achieving the release of a prisoner.

Adhamhnán communicated with people from many kingdoms and visited their kings and clergy. Between diplomacy and prayer, he developed a new approach to dealing with violence. It is still relevant over 1400 years since his death. A new book by lawyer and historian James W. Houlihan tells the story and of the similarities with the Geneva Conventions which provided a basis for international law after the two world wars of the twentieth century.

In the time of Adhamhnán kings were still making war. Adhamhnán understood that war could not be ended altogether but wished to restrain violence against women and children and non-combatants.

In 697 Adhamhnán succeeded in bringing kings, abbots, bishops and religious leaders together at Birr in Offaly. He was supported by the king of Tara. The convention of kings and clergy promulgated a new law, Cáin Adhamhnáin or the Law of Innocents between kingdoms throughout Ireland to Scotland and even the to the abbey of Lindisfarne in Northumbria. 91 kings and church leaders put their names to the law. Among them were the abbot of Armagh, the king of Tara, the kings of Dalriada in Ireland and Scotland, and Bruide the king of the Picts. There is no real parallel until the Geneva Conventions when nation states came together after the two world wars over 1400 years later. A similar approach underlies the conventions on climate change. May Adhamhnán’s influence go further still!

St Columba’s Day on the Isle of Canna

The Feast day of Colmcille in Gleann